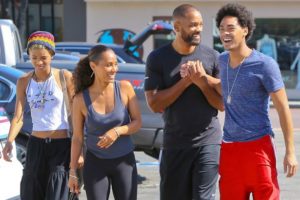 In this article from People magazine, Jada Smith, and by inference, also her husband Will Smith, reveal that their marriage adversely changed to the point where they considered divorce, but that they decided against it. Not because they fell in love again or decided to try to rekindle the flame. Rather because, for them, and perhaps their children (though there’s no indication their kids were included in the deliberations,) it seems more financially and pragmatically sensible not to divorce.

Note I did not say, more sensible to stay married. No, the Smiths did not decide in favor of marriage as it is commonly understood, they decided against divorce, and for legal and economic reasons. Beyond such reasons they appear to be acting much more like a divorced couple — with separate residences and schedules, and kids who move back and forth between them, and occasional communal total family events but not as the default setting. Perhaps also extramarital affairs — the polite People magazine doesn’t go there but other journals do.

Generally speaking, I think this is a very positive thing for the idea of marriage. It appears the Smiths are acting in an incredibly thoughtful modern calm way, with an eye for the long term — showing that even when the thrill is gone that can happen. And importantly, the fact they decided to stay married doesn’t argue for the institution of marriage, per se — it’s just about the marriage of the Smiths, in their particular situation. Meaning, if we find ourselves in an adversely changed marriage, we should try to take this approach. We may not get to the same conclusion — in fact, most of us won’t — but the method and process the Smiths are demonstrating — calm, care and consideration — is universally useful.

Of course, it’s necessary to consider that the particulars of the Smiths’ situation are indeed, particular. They are extremely wealthy, with huge amounts of money and infrastructure and personal staff to keep their marriage going as a practical matter no matter how disconnected or disinterested they feel. Furthermore, their immense wealth perhaps makes maintaining their marriage a primarily financial decision. It would appear their marriage is still a useful business relationship even if an unsatisfying emotional one. But it’s essential to note: that is only made possible by the fact that, while the marriage thrill may be gone, antipathy has not taken its place. Simple personal appreciation and respect persists.

That is, they still like each other. Or respect each other enough as human beings and co-parents to maintain amiability and civility.

And isn’t that the goal for all us? I think so.

Again, granted: The Smiths situation is made possible by the army of business and life managers their wealth allows them to employ. But whatever. It’s still a good example for all of us. In a world where many if not most marriages conclude with unnecessary, exhausting, destructive acrimony, I am wildly in favor of cool heads and warm hearts prevailing.